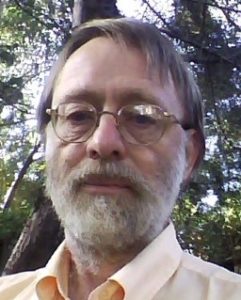 Raymond Downing, IJES Advisory Council member,  passed away on January 20, 2020, after a six-month bout with cancer that had first attacked him in 2017.  Ray was a physician who earned his MD at New York Medical College in 1975. Ray and his MD-wife Janice Armstrong provided health care to people in Appalachia for seven years and for three years on the Navajo Indian Reservation.  Ray served with the Mennonite Central Committee in Sudan and Tanzania. Most of his work had been in Kenya where he was a practicing physician and instructor at the Department of Family Medicine, Moi University School of Medicine, Eldoret, Kenya.

While trained in Western technological medicine, Ray’s approach to health care came first out of his Christian faith in the Anabaptist/Mennonite mode:  following Jesus and serving those in need. Ray was always exploring how the biblical stories of healing and disease might have insights important for our modern challenges.

Second, Ray was shaped by listening to the voices and attending to the concerns of the underserved and often ignored: impoverished Appalachians, Navajos, and Africans.  We have much to learn from attitudes and approaches to healing and disease, life, suffering, and death from these folk and their own indigenous traditions of healing.

Third, Ray had deeply immersed in the critique of technology and modern biotechnology provided by Jacques Ellul and Ivan Illich. He was a brilliant critic of the narrow, scientific-technical methods of today’s Western medicine. Of course there are benefits and there is a place for this approach—but not if it dehumanizes and silences patients and communities, not if it commodifies health care, not if it ignores the cultural and even spiritual side of healing and disease, not of treats technology as God..

Ray was the author of several books, among which Death and Life in America: Biblical Healing and Biomedicine (2008), Biohealth: Beyond Medicalization: Imposing Health (2011), and Global Health Means Listening (2018) are my favorites.   Ray was a long-time member of the International Jacques Ellul Society and delivered a paper at the 2012 Centennial celebration of Jacques Ellul’s birth at our Wheaton Conference.

Raymond Downing and his wife, Dr. Janice Armstrong, both work for the Department of Family Medicine, Moi University School of Medicine, Eldoret, Kenya.  Since finishing medical school at the University of Tennessee in 1978, Downing has practiced medicine among the Appalachian poor, on a Navajo Indian Reservation, and in Sudan, Tanzania, and Kenya.

Trained in Western scientific biomedicine — but with a long clinical experience delivering healing and care outside of the West — and with a deep immersion in biblical thinking about these topics — Downing has written a truly outstanding, challenging, thought-provoking work.  Western biomedicine is very powerful and Downing says “we need language that enables us to think and write about power.” Biblical language provides great tools and perspectives. Downing’s book sets up a dialogue between modern biomedicine and biblical healing. Downing draws a lot on the insights of Jacques Ellul and two others who were profoundly influenced by Ellul: Ivan Illich and William Stringfellow.  He was able to access some of Ellul’s difficult to find writings on medicine and health care. Illich’s Medical Nemesis (1976) and Stringfellow’s A Second Birthday (1970) — and each of their long personal struggles with serious disease and health issues — also play large in Downing’s book.

Downing sees 1980 as a true “watershed” year when modern biomedicine yielded, or began yielding to, four trends.  First is the dominance of the market, especially after a 1982 FTC decision prohibited the AMA from restricting advertising.  Medicine and medical care has since been commodified and hustled for profits and lost its traditional professional ethos.  Second, Downing describes how “medicalized prevention” has increased rapidly after 1980. By this he refers to statistical studies of risk factors, increased testing, and precautionary treatments which, while well-intended, disembody the patient.

The third change is the dominance of “systems thinking” — biotechnology and medicine become a system of which we are a part, instead of thinking of medical “tools” which are used by physicians as appropriate.  We become “tools of our tools.” And fourth is the rise of bioethics as a discipline under the simultaneous influence of western moral philosophy and a reductionist view of life as mere biological existence.

With biomedicine outlined in its historical context, Downing then turns to a reading of the healing stories of the Bible . . . from the frequent association of healing with the demonic and exorcism, to Jesus’ admonition to “tell no one” after he healed them, to the raising of Lazarus, to the meaning of spitting on the ground to create some healing mud, to repairing Malchus’s severed ear, to the wounded Beast that is healed in Revelation, to the relationship of forgiveness and sin to healing, to Jesus’ own death and resurrection.  It is flat out exciting, challenging, and illuminating to read and reflect on Dr. Downing’s understanding of these amazing texts . . . all the time alongside the work and thinking of modern biomedicine.

In the end, we are not told to abandon all of western scientific biomedicine but rather to dethrone it and restore it to a more humble and appropriate role within a larger frame of reference that is shaped by the revelation and insight of Jesus and Scripture.

This book is a great read for all the health care practitioners and professionals we know.  But it is also a great example on a broader level of how to invite the biblical revelation to restructure the way we think about a common topic in our work world.  Any workplace disciples and pastors would be inspired and challenged by this book.