Preserving a Heritage,
Extending a Critique,
Researching a Hope

We Are an Association of Scholars and Friends

The International Jacques Ellul Society, founded in 2000 by former students of Ellul, links scholars and friends of various specializations, vocations, backgrounds, and nations, who share a common interest in the legacy of Jacques Ellul (1912–94), longtime professor at the University of Bordeaux.

Our objectives are (1) to preserve and disseminate his literary and intellectual heritage, (2) to extend his penetrating social critique, especially concerning technology, and (3) to extend his theological and ethical research with its special emphases on hope and freedom. The IJES is the anglophone sister society of the francophone Association Internationale Jacques Ellul. 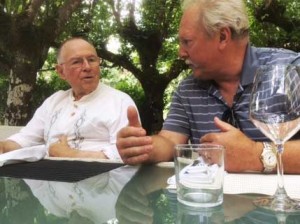 Jacques Ellul published more than fifty books and nearly a thousand articles and reviews. We seek to preserve and make broadly available this great legacy by

Ellul is best known around the world for his penetrating critique of la technique, of the character and impact of technology on our world. Ellul’s critical interest lay in the forces and institutions that shape 21st-century life and pose the greatest challenges to the health and future of humanity and nature. We encourage continued research and critical thought in this tradition, with a special focus on technology, as well as on politics, economics, globalization, education, art, language, communication, religion, and popular culture. The IJES is not an antiquarian society interested only in a reverent inspection of Jacques Ellul’s works. In the spirit of Ellul himself, it is a movement to encourage the extension of a serious critique of technological civilization.

Ellul was not only a social critic but also a theologian and activist in church and community. Because of his profound faith in the “Wholly Other” breaking into human history, he refused to become a pessimist about the predominantly negative social trends he studied. He insisted that he was above all a person of hope and freedom, searching for signs of hope in Holy Scripture and in history. We encourage continued theological and ethical research on hope and freedom with a special focus on the Jewish and Christian Scriptures.