“The protagonists of my prints are capable of changing the space they inhabit, but the space, in turn, can change and mold them.” 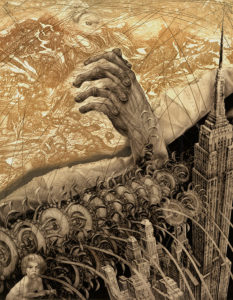 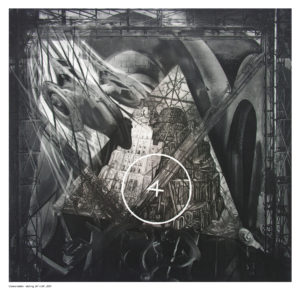 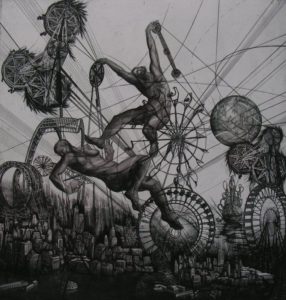 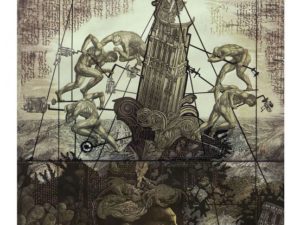 Sinking of the empire (detail)

My early professional life was connected with the theatre. While working in various drama and puppet theaters, I discovered that the most enjoyable and challenging part of the set design process for me was drawing. The rich and mysterious world of the stage starts at the drafting table with two or three pencil lines on a piece of vellum. I became more and more involved with two-dimensional graphics, translating my stage experiences into drawings and prints, which possessed their own raison d’etre.

In my prints, just like in my theater work, I am exploring the precarious connection between man-made spaces, and the men and women who inhabit them.

As a set designer, for each new production I had to create and manipulate a unique relationship between the three-walled space of the stage and a human figure. With clever painting and lighting, the stage becomes a magic box. It is capable of transforming into a boundless universe, despite its obvious physical limitations. It can present itself as a natural jungle of the Amazon, or a stone jungle of New York. A human figure in this invented space may seem powerful or helpless, important or insignificant. Sometimes it can even disappear, and its absence in the landscape of stage may be more revealing than its presence. The invented landscapes in my two-dimensional work are not much different from the theatrical stage ones: they are metaphors for human condition. Just like characters of the play, the protagonists of my prints are capable of changing the space they inhabit, but the space, in turn, can change and mold them. It is infused with human thought and aspiration. It owes its structure, its style and the very fact of its existence to human endeavor. In my work I reflect on this mutual diffusion and influence between the people and the world they create and live in.

Victoria Goro-Rapoport teaches printmaking and drawing at University of Nebraska in Kearney.

To view more about her work…