Books in Chronological Order of Publishing 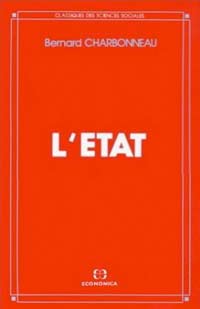 (The State). Self-published, 1949; Paris: Economica, “Classiques des Sciences sociales” series, 1987, 1999.
Bernard Charbonneau felt the fetish of the State was such a pervasive hindrance to all critical thought and constructive action that, insisting on tackling it himself, he delegated to Ellul the task of writing the book on his own discovery of Technique. As a kind of historical and theoretical counterpart of Orwell’s 1984 written at the same time, L’État still had to wait forty years to find a proper publisher, despite Ellul’s best efforts to promote it when it first came out as one of Charbonneau’s many samizdats, only available on demand from the author. 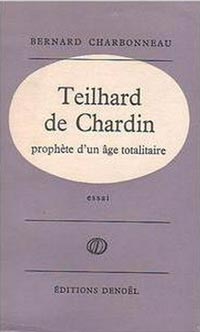 (Teilhard de Chardin, Prophet of a Totalitarian Age). Paris: Denoël, 1963.
A rare critical voice amidst the posthumous vogue of the Jesuit paleontologist and his technophile theodicy —making Christ the Omega Point of the emergent collective mind of evolution as Progress, Charbonneau’s deconstruction of this seductively pseudo-Christian and falsely humanistic ideology is a still potent, scathing indictment of the patron saint of today’s Transhumanist movement, that can help expose the latter’s disturbing implications. 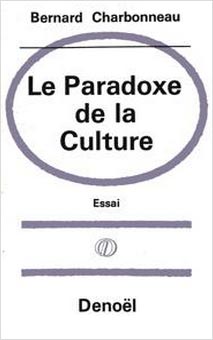 (The Paradox of Culture). Paris: Denoël, 1965.
Later updated and integrated into Nuit et jour, see below. 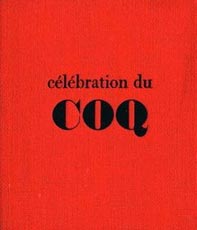 (Celebration of the Rooster). Le Jas: Robert Morel, 1966.
Charbonneau gives a free reign to his mordant wit in this satire of French nationalism, and by extension, of every local variant of this universal blight of sentimentalized State-worship. 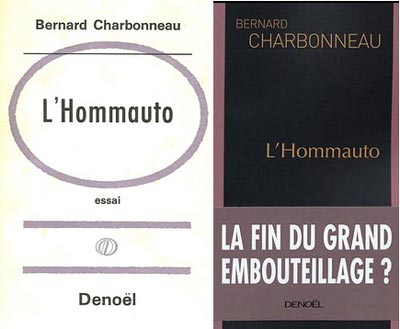 . Paris: Denoël, 1967, 2003.
Mass-man driven by the car, not the other way around, illustrating how the mirage of individual freedom is built into the total mobilization of society by Technique. 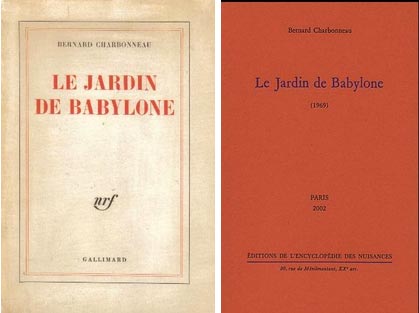 (The Garden of Babylon). Paris: Gallimard, 1969; Paris: Éditions de l’Encyclopédie des nuisances, 2002.
Expanding on his ground-breaking 1937 manifesto on “Feeling for Nature as a revolutionary force” (see below under Nous sommes des révolutionnaires malgré nous), this is Bernard Charbonneau’s definitive statement of his thesis that Nature is a discovery of the very industrial society that destroys it, usually coopting nostalgia for it to drive its own relentless expansion. 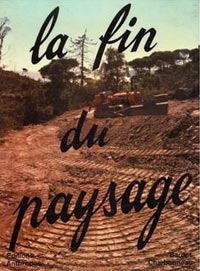 (The End of the Landscape), with Maurice Bardet: foreword and chapter introductions by BC, photos and captions by MB. Paris: Anthropos, 1972.
A picture album of the French landscape in the process of degradation by “development”. 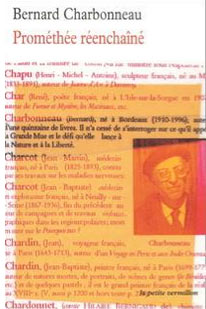 (Prometheus Rebound). Mimeographed, 1972; Paris: La Table ronde, “La petite Vermillon” series, 2001.
An anatomy of Revolution and its repeated failures, written in the aftermath of May 1968. 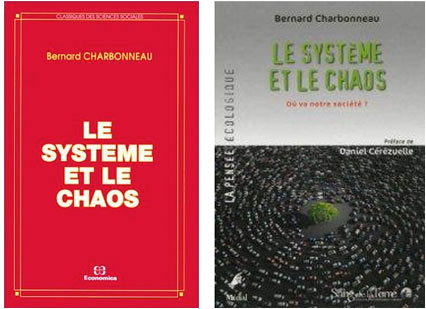 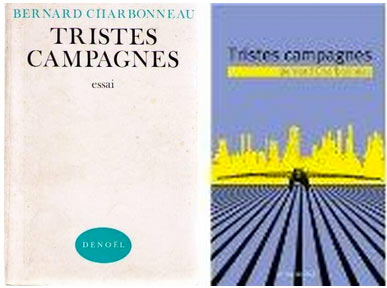 (Vanishing Countryside). Paris: Denoël, 1973; Paris: Le pas de côté, 2013.
Ironically echoing structural anthropologist Claude Lévi-Strauss’s Tristes campagnes that made concern over the plight of distant tribes fashionable, Charbonneau tries to get the French to pay attention to the tragedy of a disappearing traditional society on their own doorstep: that of the Béarn countryside where he chose to settle. (Wendell Berry comes to mind…) 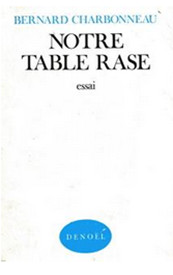 (Meagre Pickings.) Paris: Denoël, 1974.
The literal tabula rasa of what passes for food in industrial society.

(The Ecologists), with Pierre Samuel. Paris: Marabout, “Flash actualité” series, 1977.
An introduction to the fledgling environmental movement in French politics. 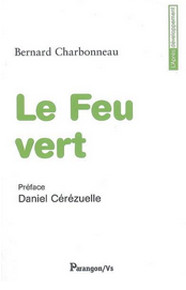 (The Green Light. A Self-Criticism of the Ecological Movement). Paris: Karthala, “Poing d’interrogation” series, 1980; Lyon: Parangon, “L’Après-développement” series, with a foreword by Daniel Cérézuelle, 2009.
A critical look back at the early years of the environmental movement and its deep roots in Christian (especially Protestant) culture, with the underlying issues of the relationship of nature and freedom. (Two key chapters where they are spelled out have been translated by Christian Roy.) 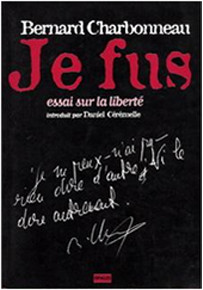 (I Was. An Essay on Freedom). Self-published, Pau: 1980; Bordeaux: Opales, with a foreword by Daniel Cérézuelle, 2000.
Man as a being who craves for freedom and yet cannot bear it as it is, i.e. the tension-fraught unity of the spirit and the flesh in a contingent mortal existence. He will thus grasp at every conceivable justification to be relieved of the anxiety this awareness brings, as long as he can convince himself he does it freely, even to achieve freedom. Society usually provides ready-made outlets for this impulse, but individual forms of escapism are not spared either in Bernard Charbonneau’s personal call on each reader to join him in the tragic experience of conscious, embodied freedom, which he considered the testament of his life’s lonely journey against every current of modern society. 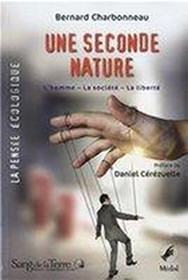 (A Second Nature). Self-published, Pau: 1981; Paris: Le sang de la Terre, “La pensée écologique” series, with a foreword by Daniel Cérézuelle, 2012.
Aphorisms around the theme of man’s ambiguous relation to society as his second nature, shielding him from the first one at the price of his own freedom. 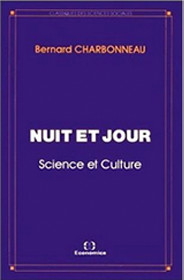 (Night and Day. Science and Culture). Paris: Economica, “Classiques des Sciences sociales” series, 1991.
The Paradox of Culture (1965, see above) as a “creative” alibi for the “serious” business of Science as modern society’s Ultima Ratio (written by 1986), in a coupling of works that shows them to be two sides of the same coin. 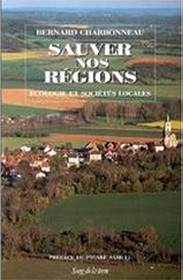 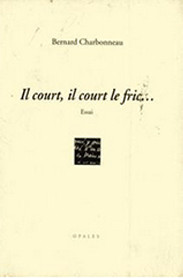 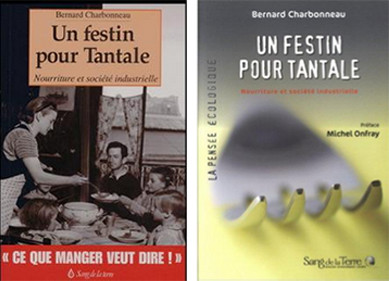 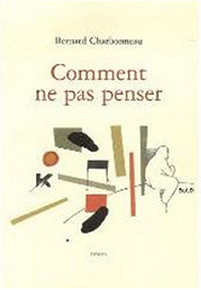 (How to Avoid Thinking). Bordeaux: Opales, 2004.
Irony as the last resort of thought at the height of seriousness. “These pages were born of the failure to communicate the essence of a life devoted to the creative debate between the individual and his society.” 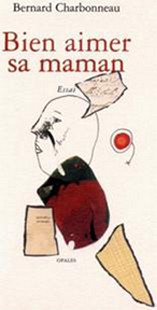 (How to Love your Mummy). Bordeaux: Opales, 2006.
A humorous look at modern Society as the individual’s Mother-Goddess, with the underlying structures (the State, the Economy, Science, Culture, etc.) that give her enduring identity under the guise of constant change. 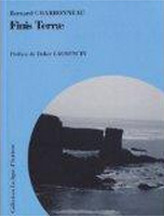 (Land’s End). Paris: À plus d’un titre, “La ligne d’horizon” series, foreword by Didier Laurencin, 2010.
The modern conquest of space and time increasingly fills up every corner and every moment of a finite world, depriving us of any meaningful experience of them. (A translation of the beginning by David Bade has been revised by Christian Roy.) 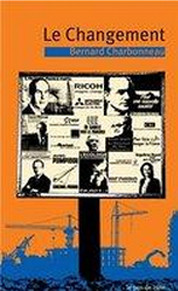 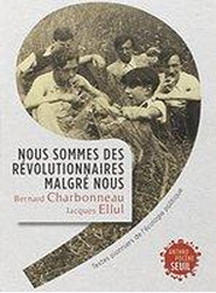 (We Are Revolutionaries in Spite of Ourselves. Pioneering Texts of Political Ecology), with Jacques Ellul. Paris: Le Seuil, “Anthropocène” series, introduction by Quentin Hardy, 2014.
This is a collection of four early texts from the time of the close collaboration of Bernard Charbonneau and Jacques Ellul as leaders of a regional branch of the Personalist movement in Southwestern France, to which they gave their unique technocritical stamp, likely making it the world’s first recognizable example of political ecology as a revolutionary movement in its own right beyond Right and Left, as shown in a fine historical introduction. It starts with the only known overtly text co-authored by Charbonneau and Ellul, “Guidelines for a Personalist Manifesto” (1935, already published as Directives pour un manifeste personnaliste in Cahiers Jacques-Ellul no 1, “Les années personnalistes”, 2004, pp. 63-79), and continues with three dazzlingly prophetic Charbonneau texts: the public lectures “Progress against Man” (1936) and “The Year 2000” (1945, on the implications of the A-bomb), as well as the programmatic essay “Feeling for Nature as a revolutionary force” (1937). 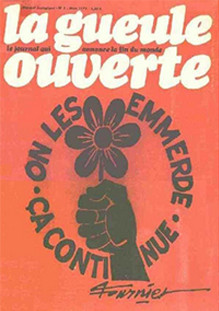 Bernard Charbonneau published a great many articles in several periodicals, starting with those of the Personalist movement, contributing a few important articles (e.g. on advertising and on education) to its main review Esprit, but, along with Ellul, mostly writing much of the material of tiny-circulation internal newsletters of its regional branches in Southwestern France, where most of their key ideas are first articulated. After the war, Ellul would be instrumental in giving Charbonneau access to Protestant publications, such as the student journal Le Semeur to which he occasionally contributed from 1945 to the 1980s, and especially the weekly Réforme from 1950 to the early 1960s, where the topics of their respective books were often first sketched —even those of one by the other in some cases! After getting a second wind as an elder statesman of the environmental movement of the 1970s, Charbonneau had a regular column in La Gueule ouverte, an appropriately irreverent ecological spin-off of the satirical paper Charlie-Hebdo, from 1972 to 1977, and would also contribute to the regional newspaper La République des Pyrénées from 1977 to 1983, as well as to the environmentalist review Combat Nature from 1980 to his death in 1996. In the early 1990s, at the instigation of Christian Roy, Charbonneau also contributed to special issues of the Montreal-based trilingual “transcultural magazine” Vice Versa on the themes of nature, work, and media.

View this Academia webpage with about 20 posted papers and articles

Here are a few key articles on Bernard Charbonneau :

“Ecological Personalism: The Bordeaux School of Bernard Charbonneau and Jacques Ellul”, in Ethical Perspectives (organ of the European Ethics Network), vol. VI, no 1, April 1999, pp. 33-44 (summarized as document no. 698481 in Vol. 36 of The Philosopher’s Index, 2003), available online as a pdf at Ethical Perspectives.