“Ellul’s theological works are attempts…to speak the Word of God into the world he describes in his sociological studies in order that Christians may resist its destructive powers and bring hope and freedom.”

Those who only know Ellul’s sociological writings are sometimes unaware of his extensive theological, ethical and biblical studies.  This is because the few important books which combine sociological and theological work (for example, The New Demons and Humiliation of the Word), are the exception.  Readers of his writings on technology, propaganda or the state are given no hints that he was a committed Christian and a significant theological writer.  Such ignorance is a major problem in understanding his thought because he consciously wrote the two sets of works as a “composition in counterpoint” in which sociological and theological books were in dialogue with each other.  He even spoke of writing one long book in which each individual book constituted a chapter!

Given the world Ellul describes and critiques in his sociological writing, his theological works ask what theology, what ethic, what biblical knowledge is required in this world.  They can be categorised in various ways, and although several works resist any schema, a broad four-fold division may be helpful.

First, there are studies of specific parts of Scripture.  These are sometimes studies of whole books – commentaries, though not in the traditional sense — as in his writing on Ecclesiastes (Reason for Being) and Revelation (Apocalypse), probably his favourite Old and New Testament books, or on Jonah.  There is also the newly translated study of Romans 9-11 (An Unjust God?) and two untranslated works on Genesis and on Revelation.  Recently, William Vanderburg has produced a volume bringing together talks by Ellul on Genesis, Job, Matthean parables, and the opening verses of John (On Freedom, Love, and Power).  All of these, though rarely used by scholars more wedded to historical-critical methods, seek to hear and speak the Word of God into his context and are marked by stimulating, creative theological insights into the text and its practical meaning for Christians today.

Second, there are theological studies of particular subjects – his first book, relating to his own discipline, was The Theological Foundation of Law – often with a strong element of biblical theology and exegesis. One of these – The Politics of God and Politics of Man – overlaps with the first category as it provides readings of narratives from 2 Kings.  Unpacking the relationship between kings and prophets and the work of God in the world of political power, these studies act as the dialogue partner to his analysis of contemporary politics in The Political Illusion.  Undoubtedly the most important work here is The Meaning of the City which offers a rich reading of the canonical vision of the city from Genesis to Revelation and acts as the counterpoint to The Technological Society.  It is one of the best guides to Ellul’s theology as a whole, showing how God’s purposes of communion in creation are rejected by us in the Fall (which Ellul called the Rupture) leading to the building of cities as a counter-creation (Cain, Babel) but how in redemption God embraces and adopts this human work of rebellion and ultimately makes it – in the New Jerusalem – the heart of his gift in the new creation.  There are also studies relating to economics – Money and Power and now On Being Rich and Poor which includes reflections on Amos and James – as well as his Prayer and Violence and Anarchy and Christianity written late in life at the request of an anarchist group. 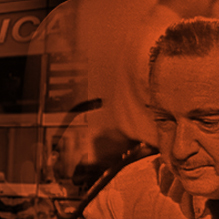 Third, there are writings which set out his vision of the Christian’s relationship to wider society where his vision of God as the Wholly Other who loves in freedom and speaks his Word into human history leads him to view God’s people as those who must be engaged (out of love) but in a distinctive way (reflecting God’s holiness) which, through living out the Word, brings Christian freedom into the world’s various necessities.  His early Presence of the Kingdom, talks given to the World Council of Churches just after the war, remains the best way into Ellul’s thought.  In reading it one often finds a few sentences or paragraphs which sketch ideas he would later develop into whole books.  He later felt the need to clarify his differences with other, revolutionary models of Christian engagement, notably in False Presence of the Kingdom and Jesus and Marx, while Subversion of Christianity offers his reading of how, through history, the church has failed to be faithful to its calling and has been captured by the world.

Fourth, there are the volumes which comprise his (sadly never completed) Christian ethic.  To Will and To Do sets out the broad framework, including both the impossibility and necessity of a Christian ethic, and engages with leading moral theologians.  The ethic itself is structured around the theological virtues. Hope In Time of Abandonment explores the virtue which yields his Ethics of Freedom (the three-part French edition contains much extra material) and Living Faith led to an ethics of holiness (still awaiting publication).  There are, sadly, no books on love or its ethics of relation.  His recently translated If You Are the Son of God: The Suffering and Temptations of Jesus, with its reflections on the gospels, shows how his ethic, particularly of non-power, flows from his understanding of Christ.

Astonishingly all these works come from a lawyer who, although he partially completed a correspondence course of theological study during the war, was basically self-taught in theology.  The major theological influences were Kierkegaard (Ellul claimed to have read all his writings and found little with which he disagreed) and Karl Barth.  His significance is seen in his role in the French Reformed theological journal, Foi et Vie, whose editorial board he joined in 1950, which he edited from 1969 to 1985, and to which he contributed over 70 articles.  Although saying little about the church, Ellul’s theology was strongly ecclesial in the sense that it arose out of his life in the French Reformed Church where he was active in his local church (which he helped lead and met in his home for a number of years) as well as on the national councils.  It was also very consciously contextual and, to end where we began but from the other side of Ellul’s corpus, his theological works are not abstract and timeless studies but attempts, through listening to it in Scripture, to speak the Word of God into the world he describes in his sociological studies in order that Christians may resist its destructive powers and bring hope and freedom.