One of the great features of Ellul’s writings is his extraordinary ability to keep focused on what is important. It is important, for example, to take account of how readers are going to interpret your writings. It is important that they become engaged in an issue. Constant qualification can baffle the hearer. 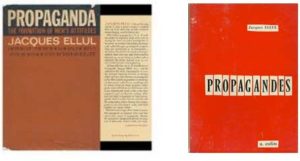 Ellul’s political and sociological writings tend to leave us with unsolved problems. In the case of propaganda, for example, he points to a need on the part of a liberal government to engage in propaganda to offset seditious ideas from within the state or propaganda from other states seeking conquest over one’s own state. But he recognizes that once a state begins to engage seriously in propaganda, it erodes its own claim to being liberal. In Propaganda, he leaves his readers with a stark understanding of the dilemma without resolving it.

I see a parallel with Albert Camus who dealt with the problem of free will and determinism by ranking different certainties. He was certain that he was free. And he was certain that the world of science presented us with a deterministic universe. What was important, then, was to be faithful to what reason presented him and not to deny one or other of these two certainties. He was not going to deny one of his certainties merely because there was an apparent contradiction.

As I understand Ellul, he preferred to hold fast to the clash of ideas, leaving the reader to solve a dilemma, rather than presenting a solution that would save the reader the trouble of thinking on her own. That did not mean he did not have a solution. For example, in conversation he approved of what might have been done (but wasn’t done) to stand up to Hitler in the late 1930s. Left wing publications folded after the victory of Franco in Spain, but keeping them alive through subsidies would likely have fostered more anti-Hitler sentiment.

In a bizarre way, I am brought back to advertisements of my childhood, where a bully insults and humiliates a “97-pound weakling” in the presence of his girl. The weakling puts on muscle through Charles Atlas’s strength-building “dynamic tension” and later returns to deck the bully, winning his girl’s admiration.

The phrase “dynamic tension,” applied intellectually instead of physically, seems to fit both Camus and Ellul.

The growth of technology and the state is a constant threat to humanistic values. In defending the latter, Ellul may appear to be a technophobe, but that is because he saw the former as being held too much in awe and in need of more balance regarding the latter.

We see that tension very strongly with the current Covid-19 pandemic. The state has indeed a duty to reduce the spread of this deadly virus, but how far should this power extend? Should the state have the power to compel universal vaccination?

Ellul advises us to be aware of the costs involved with the unchecked growth of technique and state power. Have we reckoned adequately with those costs? One of the most heart-rending costs is that of restrictions preventing close relatives being with their mother, father, spouse, sibling, grandparent, child, long-time friend, etc. when the latter are on their deathbed.

There is also the general problem of lack of social contact. For many, this is not a problem, especially if we have spacious living conditions, contact with nature and someone we live with. But for others, regulations governing whom one may be in contact with can bring extreme hardship, and possibly suicide.

Church gatherings are forbidden where they threaten the spreading of the disease. But didn’t Jesus say that he who saves his life will lose it? Yes, but he also commanded us to love one another and that means respecting the lives of others.

Just as with the propaganda dilemma described above, there are dangers with being too lax or too rigorous in countering the pandemic. What is wrong is supporting proposed measures without due consideration to fundamental rights and duties that are at stake. Some measures, in that light, may need mitigation while others need strengthening.