Shattered Monuments and the Technical System 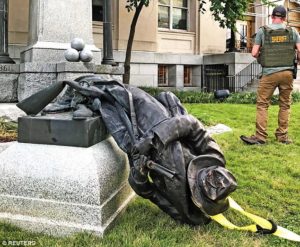 In the news every day, down goes another statue, another name erased, of one historical figure or another, condemned for one reason or another, some compelling, others not, often depending, it seems, on which pole of the day’s polarization you occupy.  Wikipedia compiles a long list casualties, including Thomas Jefferson and Teddy Roosevelt; Confederate heroes get a separate long list all their own. The lists are so long that everybody is touched, pro and con — a suspiciously systematic phenomenon.

Our wisdom literature –ranging from Juvenal to Sir Thomas Brown, Samuel Johnson to Shelley– consistently warns us of the transience and vanity of worldly memorials. One might justly rest there in complex meditation on the human condition, history, and memory.

But something else is going on; there is also a non-human, technical dimension. While each monument demolition and damnatio memoriae has its own advocates, rationale, and agenda, a sociological phenomenon is at work, and, to explain it, who better to turn to than Jacques Ellul?

Is this systematic expungement of the past not a hidden operation of the technical system? It creates a “new man”, a blank conformable by and to technique. The “new man” necessarily requires erasure of the old. The origin of the “new man” concept was principally Marxist; “l’homme nouveau” was very familiar to Ellul. He discusses the Maoist application of the idea at length in the Appendix to his work, Propaganda: The Formation of Men’s Attitudes (1962). As Monica Papazu put it in the Ellul Forum 43 (2009), “Technique … pushes forward at a high speed, while it effaces its own traces — today makes yesterday obsolete, as tomorrow’s models will cancel today’s.” Thus: “The past has no value anymore.” One might add that a “complicated past” — involving individual historic figures having humanly inextricable veins of good and bad — are especially important targets of technique. Complex humanity is intolerable to the technical system.

A crucial element of technique, in Ellul’s view, is automatism; fully realized technique is self-directing. The passion for effacing the past has no limits; the only question is: “Who’s next?” Once past transgressions and a perpetrator have been named, there is rarely rational discussion of historical context or evolving norms before the wrecking ball swings or the statue is pulled down with ropes at night. The engine is polarization; the fuel is rage; the driver is technique.